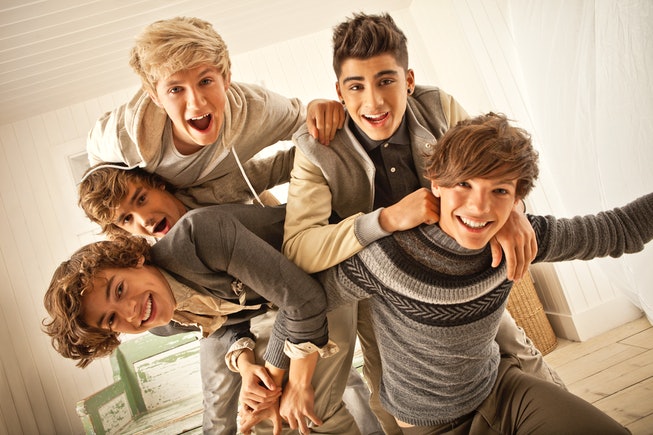 Album Review: One Direction’s Up All Night

Initial thoughts: WHY ARE THERE ALMOST 20 SONGS wHAT

I’ve always spited 1D and their fans due to the novel Believer vs. Directioner feud of the early 2010’s. But today is the day I look past those differences.

Here I go this is gonna take me forever…

1. What Makes You Beautiful

Of course I know this song and I used to pretend I didn’t know the words and I’d refuse to dance to it at school dances but I gotta enjoy the song for the nostalgia.

25 seconds in, the immediate thought is that I don’t like it but then the “can we faallll” and I was like oh I know this and I like it I just didn’t like whoever that was singing first. I’m a fan actually. Towards the end, I was a little eh but then the music comes in again, and it’s fine. I do think it’s too much of the same thing. I’m surprised my dog didn’t start howling at the yoooooouuuuuu. But I can see the appeal.

This is another one I know, how could I not? I found myself singing actually. Don’t know how I even know the words. Thinking about it, I kind of understand why I didn’t like it in its prime (other than the Bieber vs 1D thing). It’s just super poppy, not saying JB isn’t but just a different kind. But it’s the boy band, overproduced sound that is very consistent with them. So far, not much variation in their sound but there are like a million songs left on the album so we’ll see how or if it changes.

Must say I’m not a big fan of that falsetto. In general, I’m not into slow or sad songs WAIT I hear synth now, maybe it picks up. Anyway as I was saying, anything super slow or acoustic, I probably don’t like it because mama likes to dance so… It picked up a little bit but I don’t think I like whoever this is who is singing. I don’t like the next person either lol. I think their voices sound really weird, maybe too strained or something? Okay I’ve decided I don’t like this song but I’ll still finish it.

The title track, let’s hope it’s good. I feel like this song was probably embarrassing for them to make like their label or whoever probably made them make it. This is like Disney Channel level corny. I see the appeal to a 12-year-old but I think because I don’t have the nostalgia behind it, it’s hard to try to like it. I wouldn’t say it’s bad but I wouldn’t say it’s good. It’s just what’s expected for 2012 boy band pop (yet again).

Here we go with the slow sappy stuff again. NGL I’m tapping my foot. The drums are the redeeming quality here, but the same sound so far. Unless I only think that because I’m listening to the songs back to back.  They definitely took the song idea from JB’s That Should Be Me. There’s this one kinda synthy sound that’s just ruining the song for me, otherwise, I don’t think it would be bad.

By the name I anticipate I’ll like it (don’t know why). It sounds like this is their bad boy song. Okay the production on all of these songs is what’s ruining it for me. What was that weird medieval video game-sounding thing?? If I try not to dissect it and look past the weird sounds in the instrumental, it’s not bad. Again, I can see the appeal. Maybe I’m going into this too pessimistic.

Uh oh here comes acoustic guitar. Maybe I’ve heard this one before? I think it’s Niall’s voice I don’t like but I can’t tell for sure. This actually isn’t bad, I was expecting to not like it. It’s actually kind of making me feel weird like it’s overcast today and I’m sitting here alone just kinda looking around and now I feel a little uncomfortable or I feel like I should be sad about something. Okay, they could have gone without having the chorus so many times it’s gotten too repetitive. At the start it was fine but as it went on, it was too much.

I’ve heard this. I think I’ll like it. FINALLY guitar!! And not the weird electronic noises. I don’t mind this, it kind of reminds me of something from Hannah Montana. I’m just glad this isn’t as pop boy band sounding, it’s a nice break. The little vocal run at the end was nice.

I think I might ironically like this lol. Very fitting for the time period. Okay I like it, it’s kinda funny but in a good way. But one pet peeve is when songs repeat certain words like they didn’t have to do the “you you you” and “do do do” (haha do do). I give this song a thumbs up.

In just the first 10 seconds I can tell it’s gonna be mushy. I don’t have any strong feelings about this one so I don’t really know what that means? It’s like, fine but I don’t necessarily enjoy it. Yet again with the whole repeat thing with “wait wait wait” and “take take take” and so on. Something about it reminds me of Gotta Be You. But Gotta Be You is better.

——Side note: listening to this is so exhausting so I’m gonna listen to the Camp Rock Soundtrack now. BRB

I don’t really care about this song? Like I’m not reacting to it at all. A whole album of music like this is draining like I think you need energy to listen to this stuff (which I don’t currently have). I kind of hate the bridge lol.

Oh god. Are they trying to be EDM? What is this? I hate it. Who is singing right now? I want to put their head in a toilet. Okay, I like the chorus? Why do I hate the rest of it? The chorus is good, why isn’t the rest of it? Why are they singing all weird and soft during the verses? So many questions. Bottom line: the chorus is great, verses are not. I’ve never been so conflicted over a song.

Finally a sound change! Well, kinda. At least it’s more guitar and less squirty synth (yes, I used squirty as an adjective). I don’t see myself listening to this again but it’s better than the past few though.

Not my style but not bad. Okay, maybe the chorus ruined it. I think it kind of sounds like a Christmas song for some reason.

Woah. Got off to a good start with the bad boy/hard vibe but the chorus ruined it. I wish they kept that same attitude throughout the whole song as a good mood change. I could see myself liking this when I was younger though.

Reminds me of something I’d hear in Teen Beach Movie, which is definitely the idea here but yet again, they ruined it with the overproduced synth in the chorus. Also what are these lyrics? I think at this point the writers are just sick of writing songs so they did this like half asleep at 3 a.m. when you get giddy tired.

18. I Should Have Kissed You

Okay, what is up with these inconsistent sounding songs? They start one way and then completely switch by the chorus. Like why start with that riffy electric guitar and then completely drop it for this dancy sound in the chorus? I give credit to the drums because I feel like the songs have been lacking real-sounding drums. Overall: meh.

I understand the appeal of it if you’re in middle school and it’s 2013 but looking at it now, man is it overproduced. You can definitely tell it’s the product of a 2010’s music competition reality show.

Have you listened to this album? What do you think? Let us know in the comments.