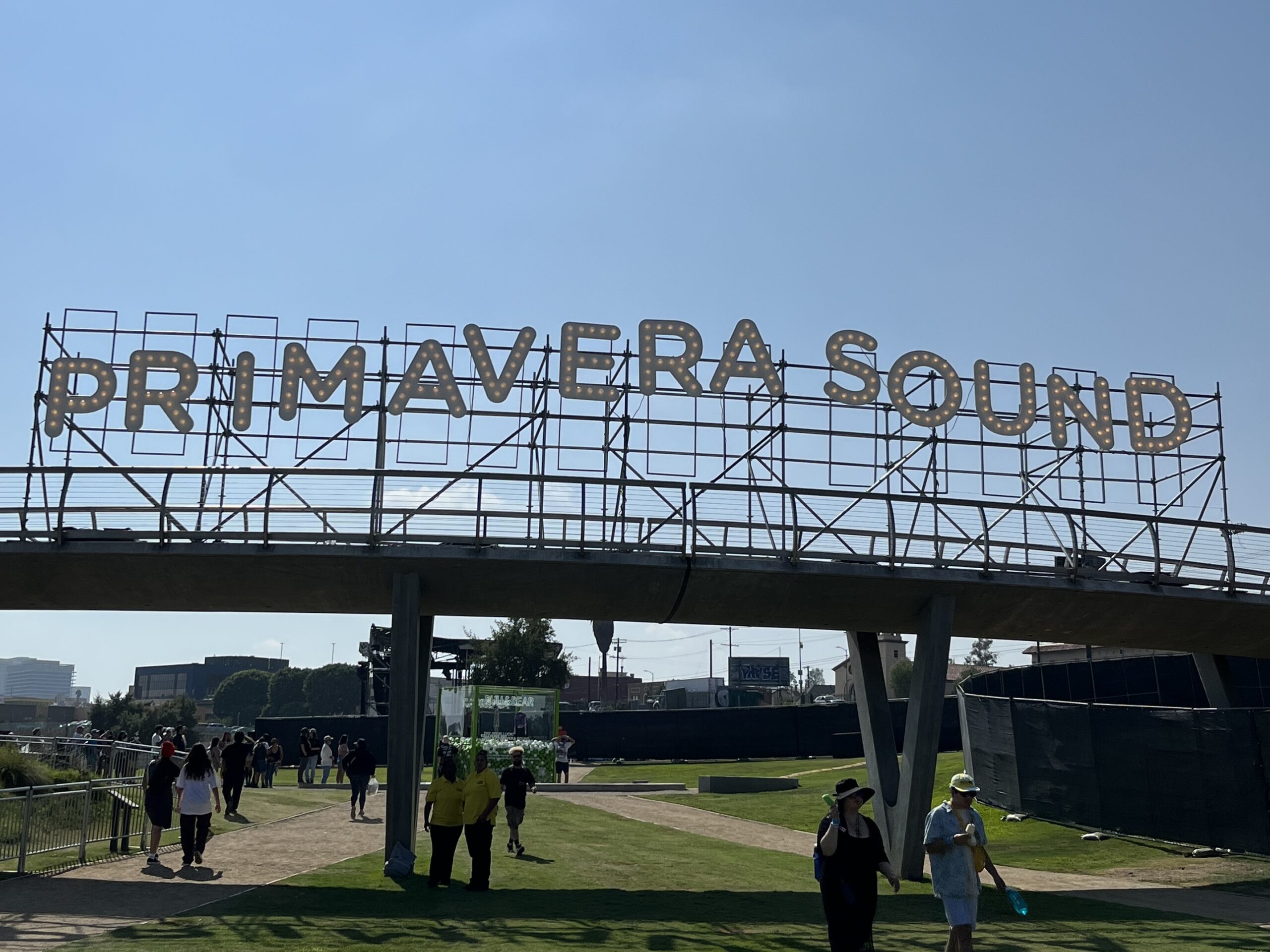 After two decades in the business, seven countries, and some of the most progressive lineups of any music festival out there, the inaugural Primavera Sound Los Angeles festival was held this past weekend at Los Angeles Historic State Park. Having graciously been given a link to purchase discounted tickets through work, I was able to justify spending money on a day ticket for Friday’s lineup, which was full to the brim with some of the boldest, most eccentric names in music today. This was my experience on the very first day of Primavera Sound Los Angeles ever.

Adhering to Primavera’s forward-thinking, eco-friendly values across the globe, the festival did not offer on-site parking and strongly encouraged ride-sharing or taking public transportation to and from the festival grounds. I was grateful to have not had to pay $40 to park for the day, but having never taken public transportation in LA, I had my share of anxiety over getting lost or having to shell out $30 on a late night Uber if I didn’t make the last train home.

LA Historic State Park honestly could not have been a better location for this festival. The proximity of the festival grounds was very relaxed and sprawled out across the park, and although the walk to and from stages was not very forgiving, the excitement and anticipation of wandering across and discovering different things along the way was very exciting. Immediately after entering, my brother and I went to the main stage to watch the second half of tropical pop and rock band Little Jesus’ set. The Primavera lineup was heavily infused across each day with Latin-American artists, and Little Jesus was a great first glimpse of that to set the tone of the day.

We waited approximately 45 minutes in the shade until hyper-pop princess Shygirl ascended upon the mainstage. Riding off of the success of the six singles she has released this year and gaining attention from artists like Rihanna, Arca, SOPHIE, and Sega Bodega over the span of her half-a-decade-long career, her presence on the Primavera Stage was captivating and absolutely electrifying, despite going on at only 4 in the afternoon. I unfortunately had to leave her set early to catch another, much more exciting set, but Shygirl gained a fan from me last weekend if one thing is for certain.

Primavera’s second biggest stage sat in the center of the festival grounds, responsible for hosting the sets of some of the festival’s heaviest hitters of the day. The first of these heaviest hitters emerged only in the last year, after gaining widespread attention on TikTok and collaborating with artists like GoldLink, WILLOW, and Sam Gelliatry along the way. The viral bedroom pop sensation PinkPantheress took to the Tecate Alta stage to sing her iconic lineup of minute-long singles and viral hits in what she told the audience was only her second LA performance ever. She was quick to call out the festival organizers for cramming all of the festival attendees under 21 into a barricaded section toward the right side of the stage, calling out the unfairness of them having to pay full price for a side view that was not originally advertised. Regardless, she did her best to include them by stepping offstage (barefoot too) to sing by their barricade. I had to leave her set before she played I must apologise, my personal favorite song of hers, but I had important business to tend to.

Back over at the main-stage, beloved industry plant by day and indie girl by night Clairo ascended upon the Primavera Stage to perform the one hit from her sophomore album Sling as well as all of the other hits from her bedroom pop and Immunity eras. I saw Clairo three years ago while she was on tour for Immunity but missed her when she was in town for Sling, so getting the opportunity to see her after three years was a huge driving force in me deciding to splurge on this festival. Clairo’s setlist was incredibly nostalgic, surprisingly including songs like 4EVER and Flaming Hot Cheetos (which she has played only three times while touring this year and had not played for two years prior to her festival tour this summer). It made my heart so full to get to see her perform again after three years, and I am sorely full of regret that I missed out on her Sling stop earlier this year.

My brother and I had several hours until we had a set that was important to us, so we used this hour and a half to explore the festival grounds (and to get a margarita, most importantly). Another rule that was ridiculed by attendees was the festival’s drink policy. Attendees that purchased alcohol in the 21+ sections were not allowed to leave the designated areas until their drinks were fully consumed, which forced my brother and I to down our $20 margaritas that I intended on drinking over the course of Stereolab’s set in two minutes. Lingering around the Tecate Alta stage trying to come down from our involuntary drunkenness, we hung out toward the back of the stage area to sit through French avant-pop band Stereolab’s set. Stereolab has been in the business for over thirty years now, and their eccentric, elevator-like music made for a very exciting soundtrack as the sun went down over Primavera Sound.
We once again made another trek back to the Primavera Stage to catch the first half of R&B singer Giveon’s set, who was added to the festival’s lineup only a mere couple of months ago. First gaining attention as a feature on Drake’s song Chicago Freestyle, Giveon made a name for himself with the release of his debut album Give or Take earlier this summer, with the album’s songs comprising the majority of his hour-long set. My brother and I found ourselves in a tough spot yet again when he had to depart from his set early to run back to the Tecate Alta stage, the last time we would be making this back and forth for the rest of the night.

Closing out our time at the Tecate Alta stage for the night was Japanese-American indie-rock icon Mitski. Dubbed by The Guardian as the “best young songwriter” in the United States, her cinematic stage presence paired with her somber, anxious lyricism was one of the many highlights of the day. My brother and I had to leave her set before she played many of her hits to get a good spot for Lorde’s headlining performance, but we were still graciously blessed with Washing Machine Heart and I Bet on Losing Dogs. Am I still bitter that I didn’t get to see her play The Only Heartbreaker, my favorite song from her discography? Very.

And last, but certainly not least, closing out the night as Primavera Sound Los Angeles’ very first headlining performance was Lorde. The Grammy award-winning New-Zealand artist has released three critically-acclaimed albums under the age of 25, emerging out of the 2010s as one of the decade’s most influential and innovative young artists. I planned a trip in May to San Francisco to see her on the Solar Power World Tour, and with my life having drastically changed since that show, I attributed seeing her for a second time to this cycle of my life coming to a close. Her music had a huge influence on my adolescence, and even more now that I am budding into adulthood. As the primary reason why I bought my ticket for this festival, it is easy for me to admit that she was the highlight of my day at Primavera. Her festival setlist varied drastically from that of her world tour, cutting out most of the songs off of Solar Power and now featuring a cover of Bananarama’s Cruel Summer. Despite this fully-stacked setlist however, she still created buffer time to speak to the audience, creating an intimate and emotional environment that had me in tears by the end of her hour and a half. She spoke to the audience on falling in love, the climate change crisis, feeling loveless in a world surrounded by love, and even teased new music. She will always be one of my favorite live performers, and if she follows her career trend of releasing new music every four years, the next time I see her I will be off of my parents’ health insurance. I needed to see her again before her touring days for Solar Power waned, and I’m really grateful that I was able to make that happen.

To put it in as very few words as I possibly can, Primavera Sound was a 10/10 experience and well worth the handsome $165 I shelled out for my day ticket. In the absence of LA’s flagship festival FYF, I hope Primavera LA is able to make a comeback for a second run next Fall, with modifications made to their rules of course. The lineup for the rest of the weekend featured dozens more notable, genre-bending names including Girl in Red, King Krule, Nine Inch Nails, and Arctic Monkeys, and if I had the money, I would’ve done anything to make the full weekend happen. The first LA edition of the Barcelona festival has cemented itself as a worthy flagship festival in LA for years to come, and if one day this year was all it took for me to fall in love with it, who knows what wonders a full weekend could do for a live music enthusiast like myself?