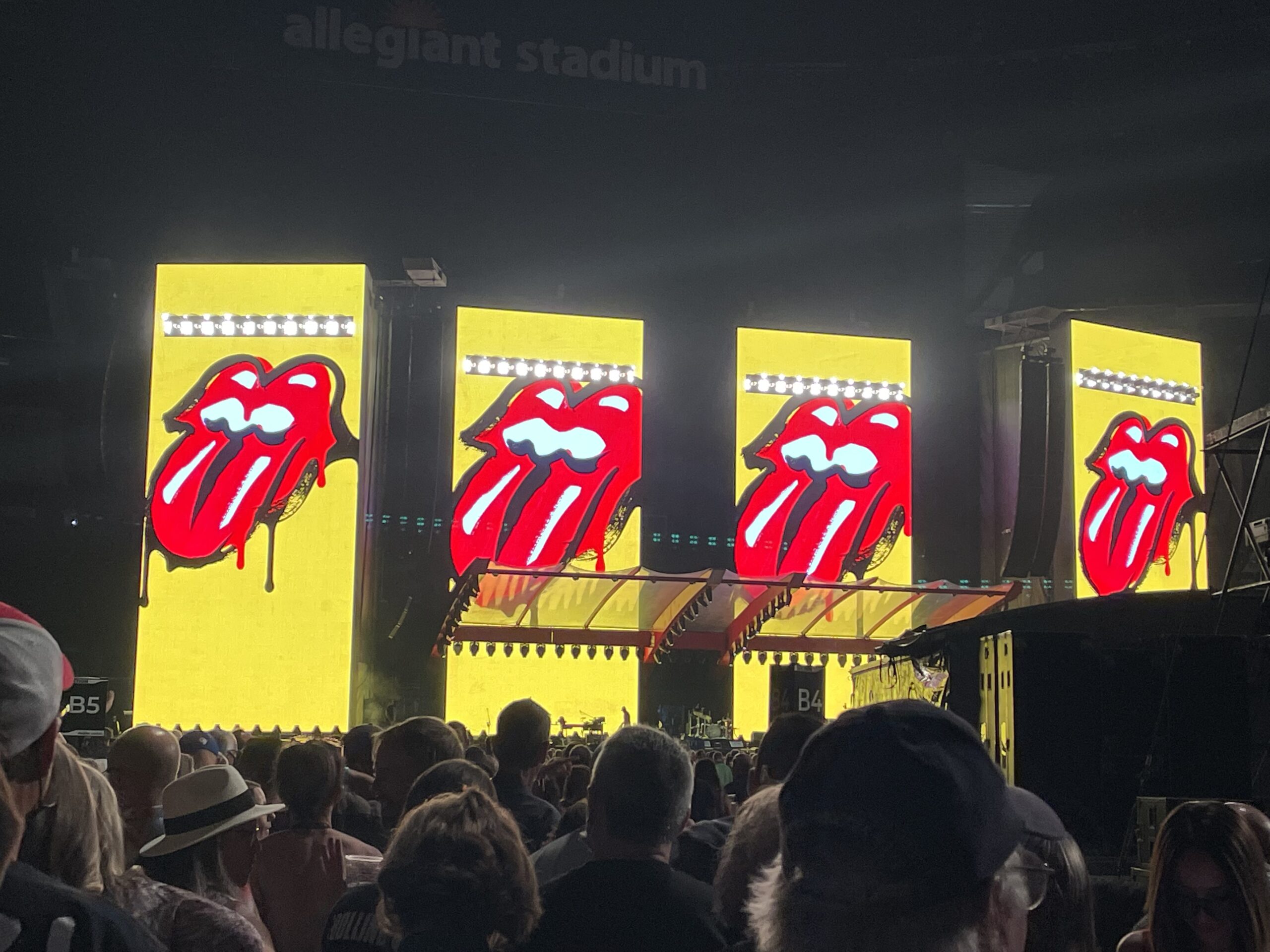 The Rolling Stones: No Filter Tour

By Shelby Stancliff November 10, 2021 No Comments

In true Rolling Stones fashion, the iconic British band took to the stage last Saturday at Allegiant Stadium in Las Vegas, rocking the packed house in all the glitz and glam you would expect from a Las Vegas show. The show opened with a touching memorial montage of original drummer Charlie Watts, who sadly died in a London hospital in late August at the age of 80. With no plans of canceling the No Filter tour that started in 2017 and halted because of Mick’s health issues and the pandemic, the show went on.

Mick Jagger took a moment on stage to speak about their late drummer, saying, “In 1962, we met this great drummer called, Charlie Watts…and since then…since those days, we’ve never done a show without him.” Standing next to bandmates, Keith Richards and with Ronnie Wood’s hand on Jagger’s back in support, Mick belted out, “We’d like to dedicate this show to Charlie!”

Mick Jagger, shook and shimmied his way up and down the flashing stage as if time stood still for him. At nearly 80 years old, the 78-year-old Jagger wasn’t phased at all, starting the night off with the political hit, “Street Fighting Man”, from their 1968 album Beggars Banquet. Swaying his hips, pumping his fists, and rocking his body in ways only Jagger can, the Stones captivated their audience filled with diehard fans young and old.

Fans at home were able to get in in the action and vote for a song to be added to the Stones’ playlist for each of the shows, and the winner for the Vegas show was “Ruby Tuesday”, getting fans hyped up and excited for more classics.

The Stones were rockin’ some of their bluesy and soulful hits too, with sounds from harmonicas and saxophones, the crowd was feeling it and jamming with the band.

And in case you were wondering who that funky drummer was, that’s Steve Jordan who was asked by Charlie to fill in for him after Charlie had surgery, and Jordan has been there since. No novice here though, as Jordan has played for Springsteen, Stevie Nicks, Saturday Night Live and The Letterman Show. Let me tell you, after what I saw Saturday from this new drummer, the band is in great hands and I’m sure Charlies was grinning with approval.

The Stones went on to play classics like “Sympathy for the Devil”, “Paint in Black”, “Honkey Tonk Woman” and “Miss You”, but the moment that shook the house was when they performed “Gimme Shelter”. Now, if you have ever heard “Gimme Shelter”, you know the how powerful the notes are in the 1969 hit. Merry Clayton was the original singer on the track with Mick, hitting those powerful, robust notes and it would seem that she would never be rivaled. However, Sasha Allen joined the band in 2016 and she is the new voice for “Gimme Shelter”, bringing her own unique talent to this formidable role.

Merry Clayton will surely never be forgotten, but Sasha Allen took the reigns and did not disappoint. Performing her solo, pouring every ounce of her soul into the performance was a true experience and it left me with actual goosebumps. The rumbling and growling of her highs and lows are exactly why she is touring with this worldwide, iconic band.

You could hear the entire stadium cheer in excitement after Sasha’s solo-that was the most affected I have ever been by a solo, and I had high expectations as “Gimme Shelter” is my favorite Stones song. Sasha and Mick sang face to face, Sasha’s frilled, dazzling Vegas dress moving with her. Both embraced each other hollering, “…it’s just a shot away! It’s just a shot away, shot away!

The Stones finished the night with their very first U.S. hit “Satisfaction”, where Mick sang with full energy, pumping up the crowd, his hot pink shirt hanging off his left shoulder as he jolted and jived across the stage. The stadium roaring and singing with the rocker. The entire band got together and locked shoulder to shoulder, taking a final bow in unison, Wood and Richards embracing as they walked off stage. With a final goodbye, Mick threw his hot pink shirt into the Las Vegas crowd, many of us wondering if this would be the last time we would ever see the Rolling Stones.

Love the Stones? Let us know in the comments.