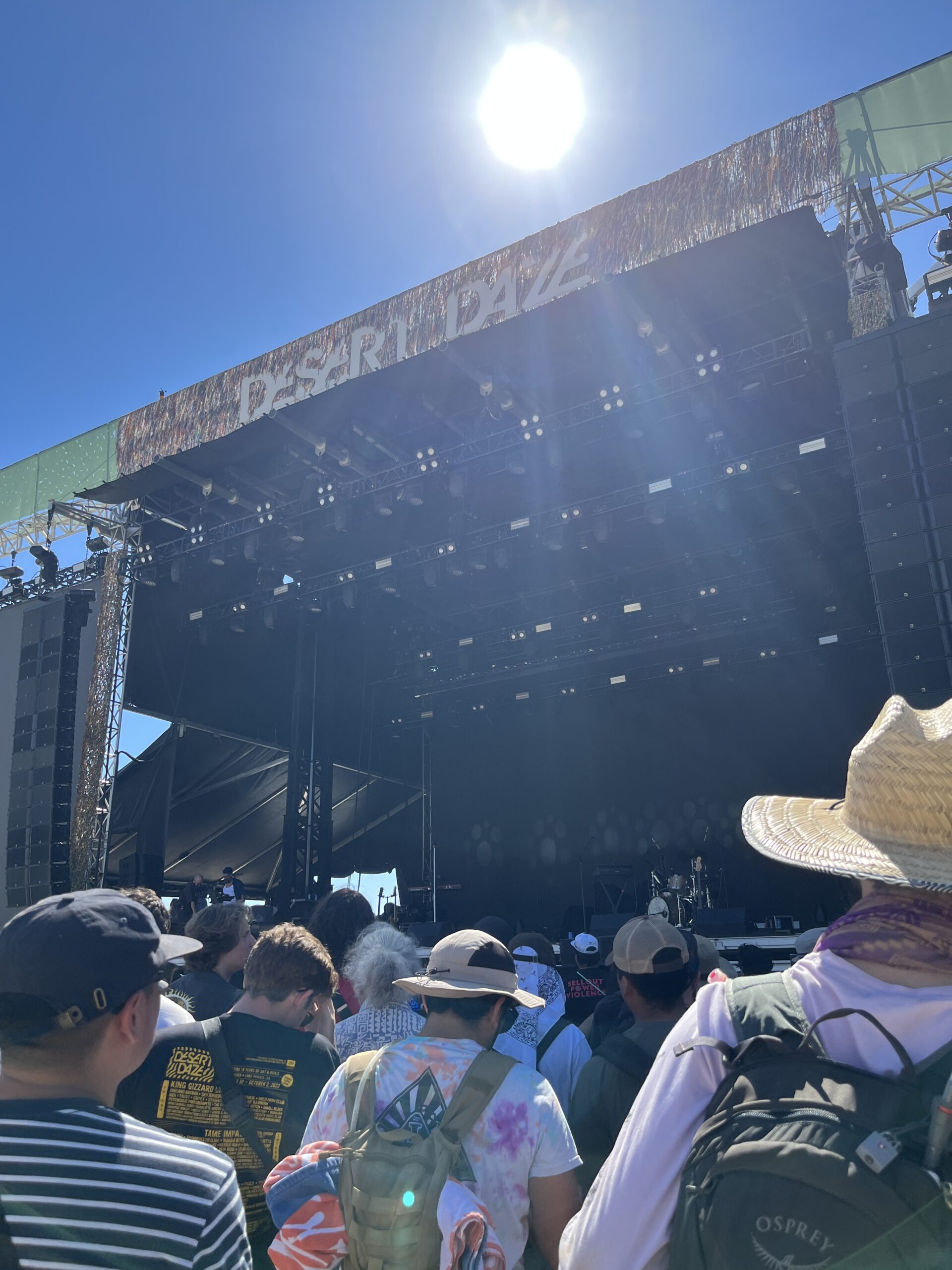 Desert Daze: The Southern-Californian festival celebrates 10 years in the desert

The 10th anniversary edition of Desert Daze was held earlier this month in Lake Perris, CA. Here was my experience.

Picture this: a festival free of capitalist-driven promotion, artists varying from psychedelic rock to indie to everything in between, and on top of all of that, being able to camp on the Lake Perris property for the entire weekend to experience it. With festival giants like Coachella, Outside Lands, and Rolling Loud dominating the Southern California festival scene by storm, hiding in the shadows (more-so the desert, actually) lies Desert Daze, dubbed by Rolling Stone as “America’s most aesthetically pleasing” festival on the market.

Housing big names like My Bloody Valentine, Wu-Tang Clan, and Cigarettes After Sex in years past, the tenth anniversary edition this past weekend held indie giants King Gizzard, Tame Impala, and Beach House for its headliners across the three days. After several days of contemplation (and an impulsive $110 spent in the parking lot of a Kung Fu Tea), I embarked on a solo trip to Lake Perris to enjoy Sunday’s lineup and needless to say, it has been my favorite festival experience thus far.

For the first set of the day, Latinx psych rock band Inner Wave ascended upon the Moon Stage. The five-piece ensemble has been performing together since they were 13 years old and recently celebrated 16 years together as a band. Taking the indie world by storm with songs like 1 4 2 and American Spirits, the band’s 50-minute set was met with an electric crowd response. I’ve actually DM’ed back and forth with Inner Wave not once, but twice, so if you’re seeing this Inner Wave, I love you and I miss our conversations!

Over at the Block Stage, the afternoon was off to a much mellower start with Strawberry Guy. The Welsh-born songwriter rose to prominence with viral hits F Song and Mrs. Magic and recently released his debut album Sun Outside My Window last October. His music feels very much like fall and home to me, and having been a fan of his for a little while, I was very stoked to get the opportunity to see him. He hasn’t had very many North-American appearances, so needless to say I was pretty stoked for this. I unfortunately had to tap out early, but I’m so glad I got to see him!

Back at the Moon Stage, JPEGMAFIA was getting ready to perform at 3:55pm, and crowds quietly but quickly started to form to get the moshing going. Commonly referred to as “Peggy” by fans, the rapper is known for taking an experimental and alternative production approach to his rap music, collaborating with the likes of BROCKHAMPTON, Flume, and touring across the US with Turnstile and Snail Mail this Fall. The moshing began almost instantaneously when the first few bars of Peggy’s single HAZARD DUTY PAY! started to play, and didn’t stop for the remainder of his hour-long set. With this being my second time seeing Peggy perform live, I was no stranger to the energy and excitement of a JPEGMAFIA set. I even met Peggy last October at his Santa Ana show and he signed my shirt and took a selfie on my phone. Peggy is a performer, and a great one at that. For a 3pm set, Peggy ensured that the bar was set especially high for the remainder of the afternoon.

After grabbing a margarita seltzer and going to the bathroom one final time, I decided to retreat over to the Moon Stage to camp out for Beach House’s headlining set at 10pm, which unfortunately meant having to hang out over there for a total of six hours through three sets to get to it (the perks of attending the festival by myself, I guess). The first of these three sets was from the Canadian instrumental band BADBADNOTGOOD, whose fusion of hip hop and jazz instrumental productions has taken the alt scene by storm. Halfway through their set, they were joined by R&B singer Charlotte Day Wilson to perform their collaboration In Your Eyes. They were a surprise standout of the night and their stage presence as an instrumental band is impressively captivating and unparalleled to anything else I’ve seen live.

After almost an hour of anticipation, The Marías took to the Moon Stage. Quickly emerging to prominence in the indie pop scene for their soulful, Spanish-infused music, the band performed songs off of their Grammy-nominated debut album CINEMA and their two EPs Superclean Vol. I and Vol. 2, as well as teased some unreleased songs.

The Marías are some of my favorite live performers. I saw them perform the day before their Desert Daze set at their sold-out hometown show at the Greek Theatre, and this performance marked the fourth time I’ve seen them live this year alone. Their hour-long set was absolutely electric, and (I may or may not be exaggerating here but) I swore Maria saw me waving to her from the second row and waved back. If I was capable of seeing them four times in a ten-month span, who knows how many times I’ll be able to see them the next time they tour? I have my fingers, toes, and eyes crossed that I’ll have new Marías to spin sometime next year.

An hour and ten minutes later, Beach House took to the main stage for their headlining set to close out the weekend. As one of the biggest names in the dream pop scene, Alex Scally and Victoria Legrand have pumped out eight critically-acclaimed studio albums over the course of their 16-year career performing together. Having spent the last year touring their recent release Once Twice Melody, the duo was added as a last minute replacement headliner only two weeks ago, after Iggy Pop had to pull out due to visa issues.

I managed to get a front row spot at the barricade for their set, something I had always dreamt of achieving at a concert of any scale – let alone a festival, and let alone for one of my favorite bands of all time. For almost the entirety of their set, tears were streaming down my face. This was my third time seeing Beach House perform this year, and in a stage of my life where change has been consistent and unavoidable, their music has been a constant in it. They were the sole driving force in me buying this ticket in the first place, and their music will speak to me in ways I will never be able to put into words. Beach House embodies the relationship between the artist and the listener better than any other performer out there, and the haze that they cast over the audience with each of their performances leaves an impact that can be felt long after.

In a jarring contrast to the ethereal haze cast over Moreno Beach by Beach House minutes before, Australian psychedelic rock band Pond closed out the festival over at the Block Stage, and what a closing set they put on. The Perth-native band has released nine studio albums in addition to a live compilation album since their formation in 2008, and has been touring their recent release 9 worldwide over the course of the last half of a year.

I had only begun listening to Pond’s discography in the weeks leading up to the festival, and it fills me with regret that it took me this long to discover them. I wish I hadn’t tapped out to beat traffic and stayed for the entirety of their 75-minute set. Watching from the back and seeing the thrashing in the crowd upfront, I felt like I needed to make my way up there. Their music completely blew me away. What a stellar closer for the day.

It’s hard to describe the ethos of Desert Daze in a single snapshot. In actuality, the Desert Daze experience is a macrocosm of unique individual experiences – the people you meet, the performances you watch live, the visual vibrance of Moreno Beach for those five days. No words I can reduce it to will do it justice. I am so grateful that the spontaneity of my erratic spending habits blessed me with one of the most incredible nights I’ve ever had. When the festival’s next lineup is released in the months to come, I strongly encourage you to make your way out to Moreno Beach next October. This festival is truly like no other. You’ll thank me later.